You are here: Start FAQ BEFORE BUYING

What do you need to know before buying a device with induction heating? Frequently Asked Questions.

Below you will find the most frequent questions asked by customers interested in purchasing an induction device. We have made every effort to respond directly to the topic of induction melting technology in the jewellery industry and to make the answers as transparent as possible. If you have any more questions, do not hesitate to contact us.

Cooling of induction devices with water. What are the costs of it?

All furnaces, casting machines and induction heaters require liquid cooling of the inductor. The water flowing through the inductor keeps the temperature constant protecting the copper tube from the high temperature of the heated crucible and alloy. In addition, the radiators in the generator block and some elements of the device housing are cooled, e.g .the casting chamber and the furnace chamber in the Agatronic casting machines. The implementation of this task can be entrusted to professional devices that cool and maintain the water temperature at a constant level thanks to a built-in compressor unit operating similarly to the one in a refrigerator. Unfortunately, this convenience brings about considerable costs 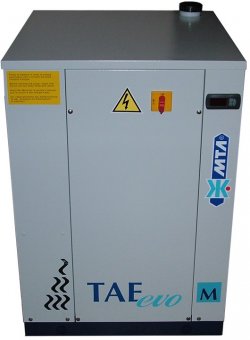 There are two alternatives to the compressor cooler. The first one is the use of tap water. This solution is simple to implement, however, due to the high instantaneous consumption, it is recommended to use this option as an emergency source. Moreover, a large temperature difference between the tap water and the air in the room where the induction furnace works will cause water condensation on the cooled furnace elements, including electronics. The cheapest solution is to make a circulation system using a garden pump and a water barrel. This system has its drawbacks, because the circulating water heats up during the operation of the device relatively quickly until the temperature at which the thermal protection of the induction device will not interrupt the operation of the generator is exceeded. This time can be extended by increasing the capacity of the water tank using a cooler with a fan plugged into the sequence of the cooling system or placing a water tank in a possibly cool room. The following film illustrates how to make a closed cooling system made of 120l barrel and a garden pump.


ATTENTION: Before making such a system, read the Operation and Maintenance Manual of the induction device or consult the manufacturer.

The estimated cost of the system is:

In order to know the answer to this question you should first of all understand the difference between the two systems of melting metals.

Resistance (resistive) melting - is the obtaining of high temperature due to the flow of electric current through a coil made of a special resistance wire. The coil is wrapped onto a ceramic molding and the whole construction is placed in thermal insulation in such a way that the heat produced is directed to the crucible with the alloy, i.e. from the heat source to the alloy. As a result, the resistance wire, ceramics, thermal insulation, crucible, and finally the alloy are subjected to heating.

Induction melting - a variable electromagnetic field created by the LC resonant system in which the visible element in the furnace is a coil (inductor) acting directly on the graphite crucible with the alloy causing its heating. The inductor mentioned is a copper tube through which water flows and, therefore, its temperature does not exceed 50 ° C. In this case the heat source is the alloy itself, in which the temperature is created to melt it.


Induction devices consume a lot of electricity. What is more cost-efficient?

Indeed. The lowest energy demand in the induction devices available on the market is 3.5 ± 4kW, where the power of the average furnace for 1.7 kg of gold is 1.5kW. However, in order to be able to talk about labor economics, one factor has to be taken into account - the time.
I will use an example. An average crucible furnace with a capacity of 1.5kW after switching on the power supply heats up from room temperature to 1000°C an hour on average, when we add the time needed to melt the metal, the first melting will be done after more than an hour. This is due to the fact of heating the resistance wire first, because it is the source of heat, then goes structural ceramics, thermal insulation, a graphite crucible and only at the very end - the alloy.
The situation is different in the case of induction melting. The generated electromagnetic field acts directly on the crucible with the alloy immediately after starting the generator. All electricity collected from the network is used to heat the crucible with metal. The construction of induction devices is devoid of unnecessary thermal insulation having a significant impact on reducing the efficiency of the device.
Therefore, the exemplary Agatronic G casting machine with a 4kW induction furnace enables the casting of a 300-gram flask just after the first two minutes counted from turning the device on at room temperature. Moreover, there is a rule that says that the induction heating device is only heated when the alloy is in the crucible.
Summing up, it can be said that the energy balance carried out above clearly opts for the induction technology of melting metals. Shortening the time of metal melting causes that the whole process of casting jewellery by the investment method is mainly reduced to the laborious preparation of wax trees, flooding them with the mass and burning out the flasks, while the casting itself is only a few minutes process crowning the entire operation.

What is induction mixing?

Which device will be the most suitable for me?

What parameters should be taken into consideration while choosing a device?
This question arises to anyone who faces the purchase of a melting furnace or an induction casting machine. We will not consider economic aspects at this point, and we will focus on technical parameters.
If we have to choose only a furnace, we have to decide what one-time portion of the alloy we want to melt.
The situation becomes more complicated when we choose a casting machine, and especially when the device is to be pressure-vacuum, i.e. the melting chamber is hermetically sealed.
Manufacturers of this kind of equipment in the technical data of offered machines give the crucible volume in cm3 or the capacity for a particular alloy after conversion according to the following formula:

The result obtained is the mass of the alloy filling the crucible to the brim. Unfortunately, this situation is practically unachievable for several reasons. First, to melt the metal in the crucible you should place the alloy in a solid form, i.e. grain, bars, tree shanks or other form of scrap, which will occupy much more space in the crucible before melting than after melting. Secondly, it must not be forgotten that the available crucible volume limits to the bottom stopper of the crucible in bottom drain systems 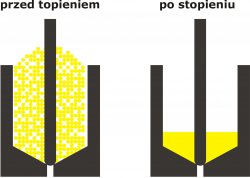 While in vacuum casting machines with an open furnace chamber one can afford to carefully pour the product during its melting, in the case of pressure-vacuum devices this kind of action would be associated with the unsealing of the hermetic furnace system.
So, what to pay attention to?
At the beginning, one should ask the question what the casting machine will be used for. If you plan to cast only gold alloys, make one-off castings (artistic jewellery) or the machine will be used occasionally, then we can afford to prepare the alloy before casting. Cutting large metal nibs will make it easier to fill the crucible.

NOTE: It is not allowed to "stuff" the metal in the crucible. Temperature expansion can break the walls of the crucible and result in the melt leakage.

If our goal is mass production, one-time casting of one or two full loads of the flask burning off furnace, in addition, the material on which we work is silver, then the time of performed operations plays a significant role. Especially that in most cases the shanks from old trees will be melted. The optimal solution is to load the crucible with the material without having to prepare the alloy. To make this feasible, the largest possible space between the wall of the crucible and the graphite stopper is important.

In practice, this space is obtained by using a crucible whose cross-section is drawn into a square. 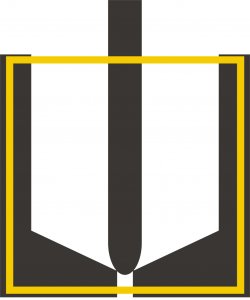 Comparing two crucibles with the same volume and different heights, we can clearly see that with the increase in altitude we lose the capacity of the crucible. This effect is influenced by the stopper, whose diameter is identical in both cases and must be longer in the high crucible. 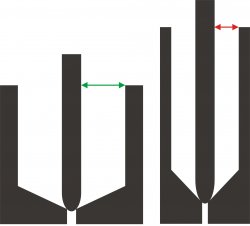 The ideal solution is a graphite crucible in which the stopper together with the drain hole is located off centre at the wall of the crucible. The charging space is then as large as possible, guaranteeing comfort during work. 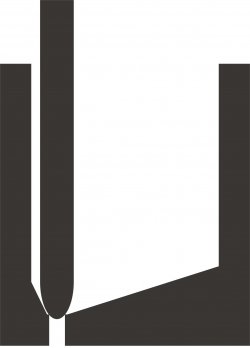 Flask.
The overwhelming majority of casting machine manufacturers use
maximum flask size in the range of Ø100x230mm for induction devices with a power of approx. 4kW. Such a dimension should successfully satisfy even the most demanding expectations. Another issue worth talking about at this point is the size of the cast flask in relation to the amount of the alloy. The melting time of metal in induction casting machines as compared to resistance devices can be successfully considered negligible. It gives the possibility of reducing the mass of cast flasks to, for example: 300g (at 4kW) and 600g (at 10kW).
Such a procedure brings about the following benefits:

The most popular way to measure temperature in the jewellery industry is to use a thermocouple. In most cases it is a K-type thermocouple, or NiCr-NiAl. This is due to the fact that the thermocouple works in the temperature range up to 1200 ° C and is relatively inexpensive.

For the temperature to be measured with the smallest possible error the device would have to be immersed in the liquid alloy whose temperature is measured. Of course, such a situation cannot be allowed, for example due to the physicochemical properties of the alloy and thermocouple.

In order for the thermocouple to be able to serve us as long as possible and to be sure that the measurement reflects the true measured temperature value, three methods of placing the thermocouple are used:

1. Measurement with the use of  a thermocouple in a graphite shield immersed in the alloy is the best solution from the point of view of measurement accuracy. This method is most often used in bottom drain foundries, where the graphite cover of the thermocouple is at the same time a stopper in the crucible‘s drain hole.

3. The temperature measurement of the bottom of the crucible is burdened with the possibility of the biggest error among the previously mentioned systems. The sensor indication can be even worse when the crucible is in the ceramic cover. Ceramics is a heat insulator whose main goal is to limit the emission of high temperature towards the inductor, in this case also towards the thermocouple.
This solution is quite popular in induction furnaces manufactured by Italian producers.